In this second spring of the "plague year," I'm attending the NCPH 2021 annual meeting virtually. Although it's has been challenging to bring my full attention to the conference, even when I'm tuning in, I've still been able to witness and participate in a lot of valuable "convening" of the best and brightest in the field.
On Friday, March 19, 2021, there was a particularly powerful live session called "Local History as Public Advocacy." Convened by Kathryn Julian of Westminster College, the session carried the following description: "History has long been used as a vehicle to raise awareness for contemporary problems, to advance social causes, and to reveal the roots of societal injustices and inequalities. But local and public historians, working in a discipline with its own set of methodologies and questions, confront limits to what history can or cannot 'say' about the present. This roundtable aims to deepen the conversation on how public historians can or should advocate on behalf of communities, whether in museums, the classroom, the arts, social media, or through political channels. We will reflect on the constraints and limitations that historians confront at the intersection of history and public advocacy." The session brought together a diverse group of commentators from across the field including Holly George of Utah State Historical Society, Chel Miller of the New York State Coalition Against Sexual Assulat, Jedediah Rogers of the Uta State Historical Society, Angela Tate of Northwester University (on her way to a new job at the Smithsonian), and Lacy Wilson of the Charlotte Hawkins Brown Memorial State Historic Site (and formerly of the Owens-Wilson House and Slave Quarters in Savannah, Georgia).
The conversation ranged across issues, from place-names in Utah, to staff experiences in Illinois, to visitor expectations in Georgia. Some powerful insights emerged from the conversation. Among them:
All of these insights raised important questions about the intersections of our personal and professional ethics. When we make connections between the present and the past, we are inevitably advocating for something, even if that something seems tremendously obvious to us as public history professionals. Still, there are limitations on when, where, and how, that kind of advocacy can, and should, take place in our work. These are the limits placed on the "scope and content" of our work.
All of this was swimming around in my head as I prepared to co-facilitate a "late-breaking" session on Saturday, March 20. Our session, "Public History: Here and Now" came about when we were wrestling with whether and how to write a reflective post for History@Work as an editorial team shortly after the confirmation of the Biden/Harris presidential election and the coinciding right-wing insurrection at the U.S. Capitol. Our session description tried to bring it all together: "What does it mean to do public history in 2021? This past year has been marked by the ravages of the COVID-19 pandemic as well as political unrest ranging from the anti-racist protest movements spurred by the police killing of George Floyd in May to the right wing extremist insurrection at the U.S. Capitol on January 6. But the deeper roots of all of these phenomena have a way of intertwining with our personal and professional identities. A little more than four years ago, History@Work published a reaction to the presidential election of Donald Trump (https://ncph.org/history-at-work/a-response-to-the-election). Now, we are hoping to create space for NCPH conference attendees to reflect on the meaning of their work at this historical moment. Guided by facilitators, participants will discuss the values that underlie their pursuit of public history and the challenges and opportunities they perceive in their work right now. The conversation might lead to a round-table reflective essay on History@Work following the conference."
The session itself was purposefully closed, in order to create a safe space for participants to share how they were thinking and feeling "at this historical moment." We didn't know who was going to attend, so we created a process to take the temperature of the field in advance of the conversation. We started with three sets of questions.
After receiving a few anonymous responses to these questions, we re-framed them for the session, which would take place via Zoom break-out rooms via PheedLoop, as follows:
The conversation was fruitful and seemed beneficial to those who attended. We will likely circle back to it as we consider what a post for History@Work might look like. For my own part, I am continuing to mull over my own thoughts and feelings on these topics. What belongs in our work? What doesn't belong in our work? Where do we belong in the work? I realize I've been thinking about these things a lot since the "Mosque at Ground Zero" incident back at the 9/11 Memorial, but these past few years have upped the emotional ante even further.
I'll conclude with a case study that this week ended up providing for me:
On Tuesday, March 17, 2021, there were shootings at three spas in metro Atlanta that killed eight people including six Asian women. These murders have elevated an important public conversation about escalating violence against Asian-Americans during the pandemic and the relative lack of public support for the community.
As the curator of the Museum of History and Holocaust Education, I am one of our social media managers.  I posted this message on our social media on Thursday (the fact that I was initially alerted to the events by a friend on Wednesday afternoon reflects my attempts to keep my sanity by maintaining a news diet):
"We are saddened and rattled by escalating violence against people of Asian heritage in our communities as they are blamed for the pandemic and targeted for harassment. We must remain vigilant against scapegoating and racism. For ways to help: http://ow.ly/qSpC50E2tXT" And I included an image of the "Stop Asian Hate" graphic showing two people holding a candle together with a heart background that's been making the rounds as a visual meme. 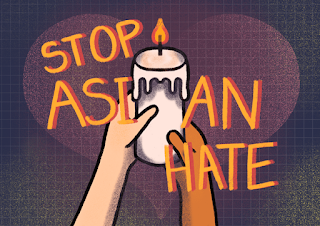 On Friday morning, I saw that there was a comment on the MHHE post:
"Why not stop all hate. There were no cries to stop Asian hate in LA with the Rodney King riots targeting Korean businesses. Seems the only victims of hate these days or people who have victim identities. Or what about any of the riots around the country that started last summer targeting innocent people?"
I found myself disturbed, but not at all surprised, by this comment. I looked at the man's public profile and concluded that he probably follows MHHE because of our connection to WWII history. His profile is filled with images related to the U.S. Army and commemoration that would traditionally be considered "patriotic." Lots of flags and photos of white male Army veterans. It also included a few relatively tasteful graphics showing his support for Trump in 2020.
Nevertheless, the man's comment disturbed my breakfast. Thinking about his response, and what my response to it should be, cut into my "non-work" time with my husband and family. I played out various scenarios in my head of what a conversation on social media might look like.  All of the scenarios seemed to lead to escalation that could be potentially damaging to the MHHE or, to me personally, depending on how they played out.  I wanted to call him out for false equivalencies, for the kind of right-wing victim culture that seems to compel people to respond to solidarity and sympathy statements with a requirement that we refrain from highlighting inequality and harassment rooted in a particular racist history when we see it because "white people are also harassed, and Black people can be violent toward other minorities."
But I could imagine glib rejoinders, because that's how social media culture works. Social media isn't a place for real conversations.
I thought about who my real intended audience was with the initial comment about Asian hate-- I wanted to make sure that our friends and patrons who are Asian and Pacific Islander know that we're thinking of them, and know that we see what's going on and see the disturbing connections to anti-Asian bias that have risen up at many other times in our past--- and those larger connections to racism and scapegoating that enabled the worst atrocities of the WWII era. The goal was not to be alarmist, but to let people know that we see, hear, and support them. But what to do about people like the commenter?  Our museum is based in northwest Georgia. Many members of our audience are probably politically aligned with his views.
So, in the end, I left this comment on his comment: "If you have questions about why MHHE would choose to bring attention to targeting and harassment of Asian Americans right now, you are very welcome to explore our many free resources including university-level educational modules, online exhibits, and more. https://historymuseum.kennesaw.edu/edu.../digital-education/"
This partially feels like a cop-out, but it also feels like the best I could do.  We have a lot of long-form, nuanced, free public history material that people like the commenter are welcome to interact with at their own pace. Our online resources are rooted in inquiry, try to anticipate many questions that contemporary people might have about the past, and attempt to provide perspectives both broad and deep. Maybe, if someone like the commenter took the time to participate in our educational modules about immigration, about Japanese internment, about Black Lives Matter, or about the targets and victims of the Holocaust, he might come away with a better idea about why a Holocaust museum would call attention to contemporary bias incidents against Asian Americans. Maybe even a small seed would be planted that might help him think and react differently in the world. But then again, maybe not.
Still, I find myself frustrated by my feeling that I can't (or shouldn't) engage the commenter directly.  Am I wrong about that? What does it mean when a public historian is unsure of how to talk with "the public?"
Labels: Asian Americans NCPH pandemic posts presidents public history