Material Culture Riff for the Holidays 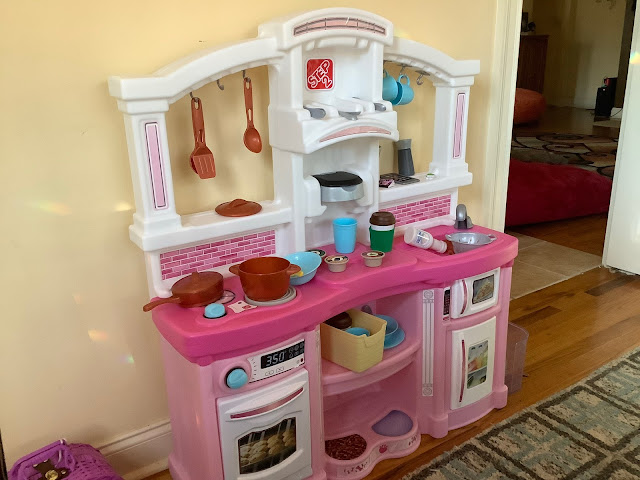 It's a time-honored tradition for grandparents to send gifts for grandchildren that require parents to take time out of their pajama-clad relaxation on Christmas morning to put together something whose assembly methods were seemingly conceived by sadistic robots.

I preface this riff in the spirit of gratitude. Our daughter is four years old. The look in her eyes when she saw that the box that was too enormous to place beneath the tree was meant for her was priceless. In fact, our entire holiday experience during quarantime was a bittersweet mix of yearning and fulfillment. We were home to light candles on every night of Chanukah. We spun dreidels for caramels and butter mints and made West African Spice Donuts for breakfast. On the second-to-last night of Chanukah, we opened gifts from my family endowed with the olfactory spirit of transportation straight to my parents' den in New Jersey: wool and firewood smoke; books and fresh bread; soap and clean cat fur. The games that arrived from a shop in Brooklyn carried thoughtful intentions from my brother and sister-in-law. "Who Am I?" was a highlight of our Sunday with our daughter showing an uncanny knack for drawing magical creatures.

A week later, we tackled the pile of gifts that had slowly accumulated beneath the tree since early December. Santa had cheekily left gifts for the kids in their bedroom: crystals that replicated rainbows in the eastern morning light. After a traditional breakfast of "eggs in purgatory" we took the unwrapping at a leisurely pace. Unicorns figured prominently, as did texture and interactivity. A set of toys made in Japan was labeled "Squishy Paradise." Marvel figurines began epically battling immediately. Brightly colored bed-sets bedecked with beloved characters were revealed and squealed over. Movies, books, and games from as nearby as Decatur and as far away as Vermont were studied and then set aside for later enjoyment. The room crackled with the potential energy of laughter. A real china tea-set with wonderful, whimsical, polka-dots was treated with the reverence it deserved until plastic practice swords drew both children out into the yard in the chill of the morning. No weeds or dead branches were safe.

There was a lull in which my husband and I looked at each other and knew it was time. We opened the box labeled "Step 2 Kitchen" and were met by a cascade of plastic pieces followed by a flurry of decal sheets and finally the clang of a plastic bag of screws. The instruction sheets contained only numbers and pictures. There were no pre-drilled holes in the plastic. I repeat-- no holes. We set about our task with an inevitable combination of snark and devotion. Yes, we will get a hammer to punch holes in the plastic with the screws. But yes, the spirit of Christmas will be tested when said hammer and screw dig into a thumb instead of the intended plastic. No, we are not privy to the magic formula of attaching parallel plastic pieces at a 45 degree angle. Yes, we will studiously study the decal diagram. No, we will not procure a screwdriver long enough, and tiny enough, to reveal the battery slot to endow the larger burner with sound effects.

Maybe forty minutes and some creative profanity later, the kitchen was assembled. Here was a perfect reflection of American consumer expectations in 2020. There was a Kurig-style coffee maker with single-use pods for coffee, tea, and coco. Only the magic of make-believe would enable their endless reuse. There were two paper to-go cups, made out of plastic. There was a tiny smart phone pre-loaded with an array of colorful apps. A food and water dish for a small dog was built into the bottom of the pink decor. Our daughter loved it all, although she did not understand the coffee maker. (I'm one of those sticklers for grinding my own beans and using an Aero-press.) Our son became the dog. They named him "Earthquake" after the sound and fury he unleashed within the empty box that had contained the kitchen. 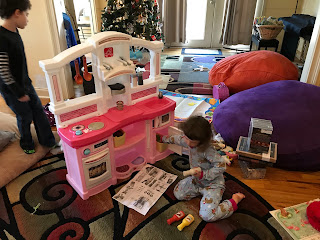 We moved the kitchen into our dining room where it was immediately dappled by rainbows from our daughter's Santa-crystal. Wonderfully, goofily bedecked in my quarter of the set of four matching sloth pjs sent by my aunt in Texas, and watching the sun twinkle on the blue topaz "ice" necklace given to me by my husband, I felt the kind of warmth intended by the season's traditions of gift-giving more completely than I had ever felt it before. Our nuclear family was alone together for the winter holidays for the first time in our son's seven years, the thirteen years of our marriage, and the 36 years of my life. But we were alone like a crystal in the window. We had caught the gifts, and the cards, and the texts, and the calls like rays emanating from sources of light across the miles. We had become a prism for that light and all the intention behind it. And I felt that the "things" of this season would continue to vibrate with the light of their intentions long into the new year.

Unknown said…
Your writing is as magical as the unicorns and rainbows. Thank you for sharing and allowing us all to drift into your holiday adventure.