Spring and Summer of Welcoming Museums

May and July this year marked some fantastic opportunities to visit museums in New Jersey, New York, and Vermont with my family. It takes a special site to engage a 2.5-year-old and an almost-6-year-old along with their mid-30s parents and an assortment of other relatives. Integrated children's programming marked our best experiences in science, history, agriculture, and art museums this season.


The New Jersey State Museum proved perfect for a rain-threatening morning in May. I grew up in New Jersey, but I don't recall ever visiting the state's flagship museum during my childhood, although it is clearly popular with field trip groups. Our visit began with a most favorable impression of Trenton. Upon parking our car a few blocks northwest of the museum on State Street, we were greeted by a local lawyer who offered to watch our car for us from his office window. When we entered the museum, we were surprised to discover that admission is free. We began by visiting the local dinosaurs on the second floor, pausing for a snack break in the multipurpose room overlooking the Delaware River, and then making our way through "Pretty Big Things: Stories of New Jersey History." Both of these exhibits were marked by children's activities within the exhibit space (although they were best integrated in the "Pretty Big Things" gallery). Both kids enjoyed dressing up as animals/explorers in "Written in Rocks," giving the adults an opportunity to learn some up-to-date paleontology.

We concluded our visit with a circle through"Jersey Crocs Rule!" which had some truly clever info-graphics and body-scale activities. My son is still comparing the relative bite-strength of different animals of the present and the distant past. On our way out, we breezed through the art exhibit, just long enough for me to appreciate the curatorial approach through which all the artistic eras are placed in their historical context.  Yay for linking art and history! 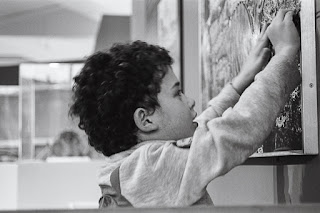 The only exhibit that proved tough to maintain my kids' attention in a way that was safe for the artifacts was the Civil War Flags exhibit.  There simply wasn't enough room to provide the kind of in-gallery supplemental children's materials that worked so well elsewhere. Plus, textiles are always challenging due to the low-light-level requirements and careful protection of the artifacts.  I'm looking forward to returning to the museum next time I visit the Garden State. My only other note of critique is that the museum's website does not do justice to the experience on offer. Tucked into the NJ Department of State's parent website, the museum is not able to assert its own friendly, accessible brand. If NJ is willing, I'd wager some Web emancipation would help the museum gain some cultural traction.

Our museum adventures continued in July with a visit to Fort Ticonderoga. After a disappointing trip to Colonial Williamsburg in the winter of 2018, I was a bit nervous about spending the day at a living history installation. We were helped by some interesting weather (periodic cloud-bursts mixed with sun) and a divide-and-conquer approach to the visit (I stuck with Ilana while Matt and my father-in-law followed Leo's interests). I quickly came to appreciate the attention-to-detail paid by the park's interpretive staff. Each year, the interpreters depict a different moment in the fort's history. In 2019, it was the year of 1755 when the fort was under French occupation. Uniforms were made for accuracy on the premises and musket demonstrations were conducted with the original French commands (and ample English interpretation). Ilana and I hung out by the camp stove while soldiers lit fires to boil water for split peas and fry up salt pork. Although these rations would undoubtedly prove monotonous as daily fare, they smelled delicious to Ilana who wanted to partake. The food was off-limits to visitors, but Ilana and I were able to sew a red felt tuke in the soldiers' barracks, instructed by a drummer in the fife-and-drum corps whom Ilana eagerly followed on a parade down to the King's Garden. Meanwhile, Leo attached himself to a team of working red oxen and learned about their care and feeding. We all enjoyed lunch in the colorful gardens before hitting the road again, bound for Vermont.

Oxen were just the beginning of Leo's tour of northeastern agriculture. Shelburne Farms proved to be another highlight of our trip, from the morning chicken parade to opportunities to milk a cow and pet baby kids. Leo found a whole day's worth of interesting activities concluding with the chicken round up at the end of the day. We all enjoyed sampling cheese made on-premises while watching curds and whey slowly separating via paddles in a metal vat. Shelburne Farms is a curious place originally owned by the Vanderbilt-Webb family who consolidated 32 family farms into a single estate between 1886 and 1902. Its current mission to educate for a sustainable future dates back to 1972 and a 1984 nonprofit organization. Today, the staff does a great job of integrating the educational and working farm elements, even including kid-centric activities, such as play-food, books, and miniature farm animals, adjacent to all the places where adults may wish to linger and learn. 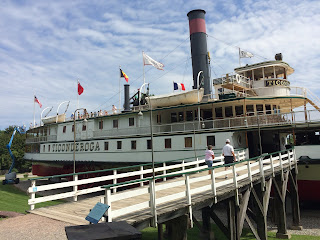 Easily confused with its sister institution down the street, the Shelburne Museum is an experience worth having for all ages, and one that simply cannot be had in a single day. We first visited over Thanksgiving weekend, last November and most of the 39 buildings on its 45 acres were closed for the season.  We still found plenty to enjoy in its year-round buildings, but our summer visit was even more fun. The highlight for me was the Steamboat Ticonderoga, a Lake Champlain steamboat that operated during the first half of the 20th century and is now in permanent dry-dock. The visitor experience on the Ticonderoga and elsewhere mixes protected original artifacts with accessible reproductions and carts laden with hands-on kids' activities. This helps to ensure that visitors heed "do not touch warnings" when they are given but are able to scratch the itch to touch most of the time.

My favorite "do not touch" zones included a 19th century general store and modest homesteaders' cottage.

In addition to the steamboat and an early 20th-century jail, the kids loved the carousel and circus building which contained an enormous miniature circus parade in all its strange, exoticized, turn-of-the-20th century hierarchical entertainment culture glory. Like the Henry Ford and Greenfield Village, the Shelburne Museum is a great place to go to learn about American culture and American self-conception precisely because of its artifice and inauthenticity juxtaposed with "real" architecture and artifacts.

A chronicle of our visit to Vermont's great kid-friendly educational attractions would be incomplete without a shout-out to the ECHO Leahy Center for Lake Champlain. Highlights for Leo included the "skull stories" hands-on science cart expertly facilitated by a young bearded educator (with sparkly nail-polish just like Leo's!) and a "magic sand" table where you could follow the path of moisture through your custom topography by making it "rain" with a wiggle of your fingers beneath a video sensor array. Ilana loved the "Champ Lane" exhibit where she could pretend to board a boat, direct the flow of water, serve me "ice cream" and "sushi," sort fruits and vegetables in English and French, view animal x-ray film, and slide down from a kid-proportioned tree house. It was fascinating for me to observe how this exhibit, designed for children ages 0-6, really didn't seem to engage Leo's full attention anymore, a marked change from our last visit when he was less than 5.5.

As a curator who does not specialize in exhibits for young children, I'm so appreciative of living in what feels like a golden age for child engagement right when my own children are in that sweet spot when positive impressions of museum visitation are being made!