Yesterday, I took a long walk with my new baby along the western border of the city of Decatur and through the former Beacon neighborhood. As David Rotenstein has documented in his ongoing research into the effaced African American history of Decatur, the Beacon neighborhood was a segregated African American enclave with an active business and cultural district and a variety of housing options, many of which were substandard.  The neighborhood was built through the mechanisms of segregation and "red-lining" and dismantled during the era of "urban renewal," with the last remnants of its architectural history, the former all-black "equalization" schools Beacon Elementary and Trinity High, removed to make way for a new municipal complex in 2013.

On a January morning, the area feels like a "no-man's land," marked by dead-ends, fences, and private, no-outlet streets. Despite the rows of parked cars and occasional passersby, quiet covers the landscape like a blanket. I thought, perhaps as a pedestrian, I would be able to navigate the entirety of Atlanta avenue from Trinity Place to Howard Street, but I was mistaken. The low-income Park Trace apartment building marks one terminus of Atlanta avenue. It is surrounded by a metal fence that I can only assume is intended to keep residents from wandering into the market-rate housing development right behind it. To get back to the other side of Atlanta Avenue, I had to traverse a marginal landscape behind the Ebster pool fence, through an Ebster Park that seemed utterly disconnected from the rest of the city of Decatur except to an empty athletic field adjacent to the more modern low-income apartments along Commerce Drive, beside Decatur High School, and out past a gated townhouse community at the corner of Commerce and Howard. Fences, criss-crossing this entire route, are discouraging to a pedestrian if not downright exclusionary. This is a marked contrast with the Oakhurst neighborhood where you can walk for miles along streets that connect with each other. 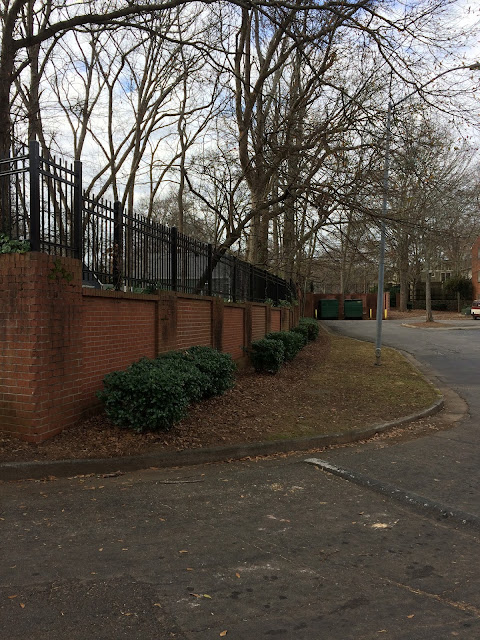 To me, and of course I speak from my own experience and position of privilege, the former Beacon neighborhood lacks friendliness, even if it feels safe and well-kept. Of course, it is the prerogative of private property owners to bound their property with fences if they so choose, but the ones in this area feel particularly obstructive.  Most are metal and spiky. These fences mark barriers both real and imagined between particular communities and the "public space" of downtown Decatur.

I've been thinking a lot about barriers lately, especially with the inauguration of Donald J. Trump happening in Washington tomorrow. I had the wonderful opportunity to participate in a Webinar sponsored by the American Alliance of Museum's EdComm about how museums should respond to the presidential election earlier this afternoon, and we spent a lot of time talking about the courage needed to stand up for and in solidarity with marginalized communities in a Trump administration, just as we did in the Obama administration.  Now is not a time to be timid in our convictions.  At the same time, we talk about bridging political gaps made more apparent by the results of this election. We argue that this work must be done, or we are doomed to inhabit echo chambers and fade into irrelevance.

But what does it mean to do this work, truly? The words we use act like the fences I encountered on my walk yesterday.  Groups of people speak in code, signaling whether to listen to each other even before any ideas have been exchanged in a dialogue. On the right, people talk about the "constraints of political correctness." They talk about authenticity and being "real." They distrust the "mainstream media" and "liberal universities" and other institutions, including museums that they claim are all controlled by "social justice warriors." On the left, people talk about the dangers of "micro-aggression" and "triggers." They talk about "intersectionality" and creating an "inclusive culture," yet they continue to place a great deal of stock in perceived "identities" associated with "privilege."

In this soundscape of coded speech, it seems that one is constantly encountering barriers and fences. Ideas of "safe space" are co-opted by anyone seeking the right to avoid listening to the opinions of others.  This is a troubling world in which to live and to work. It seems to me, that if we want to solve problems and to learn from history, we truly need to break down barriers (references to the Clinton campaign aside).  We need to set speech free again, and to do so, we need new language.  We need new leadership.  No matter our political affiliation, we need to avoid retreating into communication comfort zones. We need to create new spaces for dialogue where heuristics lack power. We need thru-ways for the exchange of ideas, not gated communities where ideas grow stale. We need to connect all of our ideological homes to a public space where we can see each other, brush elbows, help each other cross the street. We need to set our neighborhoods free to transition organically.

To do this, I believe that we need to give each other the benefit of the doubt.  We need more than empathy.  We need sympathy for each other. We need to ask each other "why" instead of hurling epithets across invisible border fences. We need to acknowledge that we are all weak.  We all live with fears.  We all want to feel secure, to "win" in a world in which we feel forced to compete. We may find our assumptions are justified. We will see each other jumping to conclusions. It is then that we should dig in, that we should lay our evidence on the table, but not before. There's too much at stake in this world to eschew rigor in favor of the safety of closed cultures. We owe it to our children, and our grandchildren, to civilization itself, to set ourselves free.
Labels: community Georgia place-based history politics posts public space speech