Victuals, Vehicles, and Violence at the Smithsonian National Museum of American History

Having a day to myself in Washington, D.C. last Friday enabled me to do something I've always wanted to do: spend an entire day at the Smithsonian National Museum of American History. Even with an entire day at my disposal, I didn't come close to seeing everything, or even to giving what I did see as much attention as it probably deserved. With some pleasant moments strolling along the artifact walls (yay! artifact walls!) to punctuate my day, I focused primarily on three exhibits: FOOD: The Exhibition, America on the Move, and The Price of Freedom: Americans at War. 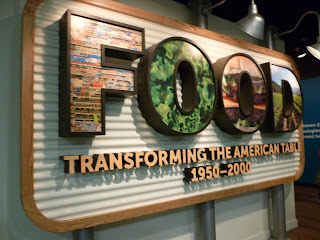 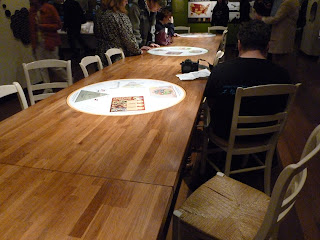 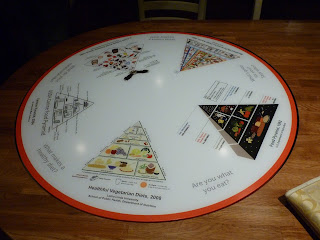 Food: The Exhibition opened only recently, in November 2012. Although Julia Child's kitchen had long played an important role in the museum's corner devoted to post-1950s, America, this new exhibit gives it pride of place and a great deal of context. Since I am currently working on a food exhibit, Lansing Eats! for the Historical Society of Greater Lansing, I visited this exhibit hoping to draw inspiration for our much smaller, but similar, endeavor. Of course, with a national audience, Food can afford to look at trends in production, distribution, and consumption of food much more broadly than we will in Lansing. Given my general knowledge of the subject, I enjoyed the way in which the NMAH tackled topics from mass production and farm labor to grocery store technological innovation, to TV dinners and the Gourmet Ghetto. I only wish that the exhibit had included some kind of introductory text that summarized food culture in America prior to 1950, just to lay the groundwork for all the change evidenced throughout the exhibit. Many of the trends shown, from convenience foods to ethnic diversification, have their roots in much earlier waves of immigration and migration across the country.  Although I found the extensive section on the US wine industry a little bit baffling (why not beer?), I really enjoyed the open table section that formed the centerpiece of the exhibit. Who knew there have been quite so many variations on the food pyramid over the years?

Living within driving distance of The Henry Ford, probably the best transportation museum in the country, I was a bit surprised by just how well-done America on the Move  was within the NMAH. Aside from enormous (and therefore fun!) artifacts with truly impressive ADA compatibility (labels with audio readers in more than one language), I thought the exhibit did a great job of highlighting particular American cities that illustrated certain national trends within US transportation history. For example, New York City got its moment in the sun during the transition from a maritime economy to one based on connections between shipping, canals, and ultimately railroads. Greater Chicago was featured in a section about suburbanization, de facto segregation, and integration, and an enormous glowing map of Los Angeles dominated the concluding section about cities shaped by automobiles. I hope that the Smithsonian can invest in a continuation of this exhibit in the next decade to look at some of the challenging questions raised by our reliance on fossil fuels and long-range shipping networks for consumer goods around the world.  I'm hopeful the curators would find an appealing yet provocative way to delve into these challenging topics as well.

If you've hung in this long, dear reader, you probably understand what I felt like when I decided to visit The Price of Freedom toward the end of my day at the NMAH. I was tired and looking to skim, not read every single item. I had my eyes peeled for provocative statements and iconic artifacts. I found myself disappointed. My impression of the Americans at War exhibit from a rather rapid walk-through was that of a bland civics textbook overview of US military history. I appreciated the inclusion of so many conflicts, from the Revolutionary War to the "Wars of Expansion" that included protracted conflicts with Native American tribes across the country. From Vietnam to "New American roles", I found myself unimpressed by the exhibit's use of towers of televisions and an enormous media wall to provide evidence of the truly intensive cultural debate that led to profound changes in how the US engages in conflicts around the world today. I kept wanting, but didn't find, examples of how the definition of "freedom" changed from conflict to conflict, and how Americans defined themselves in relation to other world powers, and how citizens and soldiers interacted and intermingled. The exhibit seemed to paint a picture of an unchanging, mostly unified, American protagonist, facing active conflicts at home and around the world. I know that exhibits are created by committees, but this one felt like it had been neutered in the process, left without a strong voice.

Back home, taking the time to look at the online version of the exhibition in more detail, I am much more impressed with the presentation, inclusion of detail, and even some elements of questioning (although I think this can still be done better) in the online version. The website is truly beautiful, easy to use, and showcases some highly resonant artifacts from POW rations to slave restraints, to a uniform worn by one of the first female combat troops during Desert Storm. With a little bit more room for historical context, informative videos, and uniformity of presentation, the web version does a better job of telling a pretty complex story, while the physical exhibit overwhelms with objects that pull too hard in some directions and not hard enough in others.
Labels: food immigration military history posts public history Smithsonian transportation