History of a Company Town

One of those nifty things about growing up in New Jersey is that every era of U.S. history is represented within a few square miles. You can witness a reenactment of George Washington Crossing the Delaware on Christmas Eve, and visit the homes of well-to-do 19th century academic luminaries in Princeton. Roebling, New Jersey, around a bend in the river about ten miles south of Trenton, provides a unique glimpse into the area's late 19th and early 20th century industrial heritage.

John Roebling, a Prussian immigrant engineer with a knack for designing suspension bridges, brought a highly successful innovation to the United States: twisted wire cables. Roebling's new technology enabled him successfully to construct bridges over Pittsburgh's precarious gorges, and eventually landed him the commission of a lifetime: to build New York City's Brooklyn Bridge in the 1860s. Sadly, John Roebling died in 1869 of Tetanus contracted as a complication of a foot injury he sustained while surveying one of the bridge's towers. His son, Washington, with help from his wife, Emily, saw the bridge's construction to completion. Washington, along with his brothers, Ferdinand and Charles, went on to build their father's wire rope company into a thriving business.

In 1904, they opened the Kinkora Steelworks on privately owned farmland, and founded the company town of Roebling for factory workers and their families to live in. The Roebling Museum, a small gem of a museum housed in the former Kinkora gatehouse, tells the story of the Roebling family, the Kinkora Works, and the town of Roebling. The relationship among these three entities is deeply intertwined and fascinating. The museum does a stellar job of giving voice to the workers through videotaped oral history, artifacts, and images, explaining the engineering innovations that made possible many of America's most iconic bridges (including the Brooklyn Bridge, George Washington Bridge, and Golden Gate Bridge), and narrating the Roeblings' family story. 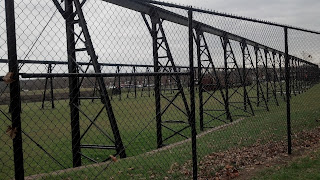 To most people familiar with labor history, the words "company town" send shivers up and down the spine. I immediately think of exploitative bosses and unfair credit systems in a company story turning free employees into indentured servants. Although planned and built with clear class delineations (basic laborers' row-houses closest to the noise of the factory, semi-detached homes a few blocks back for skilled workers, and large riverside homes for the foremen and their families), Roebling did not follow the more exploitative practices of its cousins. Although the company owned all the land and reserved the right to evict disruptive tenants from the factory and their homes in town, the workers were given access to stores, restaurants, and saloons accessible with cash, and every immigrant group was given space to build their own church and social clubs. To an immigrant used to squalid tenement apartments on the Lower East Side of New York City or similar, Roebling, with its green yards and decent-paying jobs, must have looked like a small slice of heaven. At least that's the story conveyed by the museum. Roebling's factory, which remained open for 70 years, epitomizes an industrial brand of Americana made possible by special circumstances of the 20th century.
Labels: immigration industry innovation labor history museums posts