Three weeks ago, on a Sunday morning, I visited the newly renovated Detroit Historical Museum with a group of stalwart museum explorers from greater Lansing. The museum underwent an extensive renovation during the spring and summer and reopened to enthusiastic crowds over Thanksgiving weekend.

When we arrived, we were greeted by a friendly volunteer who told us that "all the new stuff" was on the second and third levels, but the "gem of the museum," the "Streets of Old Detroit," was on the lower level.  He recommended "saving the best for last." The museum proved to offer a multitude of different methods to exhibit local history, some stronger than others. 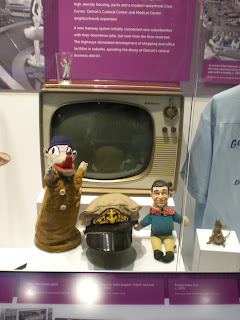 We began our visit with the Allesee Gallery of Culture, a showcase-in-the-round featuring a chronological survey of significant Detroit artifacts and cultural icons through the decades.  Each corner of the room contained a large vitrine with a timeline rail stretching along at waist-height. The timeline included key dates in Detroit history on one level and labels for artifacts contained in (and above) the vitrine on the other level, essentially ordering the artifacts chronologically as well.  In the center of each vitrine, a screen featured a narrative documentary, and an opportunity to view some artifacts and/or images in more detail.  Although detailed and visually impressive, I found this exhibit to be lacking in balance, narrative cohesion, and universal appeal.  Locals and others more familiar with Detroit in the 20th century than I was seemed to find certain iconic artifacts, such as the giant Tigers' Stadium sign, exciting and resonant, but I found the exhibit overall to be cluttered and lacking in context.  It also suffered from a strangely incongruent boosterism, glossing over the causes and effects of race riots, suburban sprawl, and political corruption.  The exhibit also made inefficient use of technology with videos that did not start on-demand and only a limited ability to crawl deeper into the background and significance of artifacts on display. I have to admit, I also found the narrative tone of the videos annoyingly reminiscent of comedy movie trailers. For me, the exhibit illustrated the limits of attempting to evoke feelings in visitors lacking in nostalgia for a particular place or time. 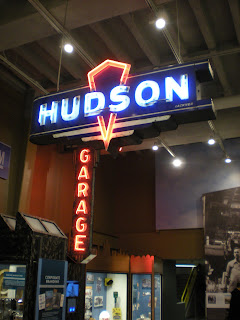 Coming through the Allesee Gallery, I wasn't expecting to be overly impressed by other parts of the museum, but the museum is truly enormous with exhibits diverse in content and design. Highlights and low-lights blended together: a fantastic reproduction of an auto assembly line "body drop" and a touchable, very early Ford model in an automotive history exhibit with a somewhat overly glowing depiction of the UAW, an informative and engaging WWII exhibit beside a "community gallery" exhibit offering little of interest to a wider audience, a "great innovators" exhibit with neatly descriptive vitrines, but in no particular order. 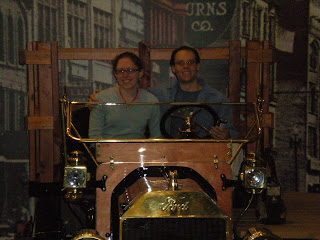 The lowest light on the museum's top floor was probably the Underground Railroad exhibit. It is clear that the exhibit's designers took some risks to emphasize immersion and atmosphere over artifacts and evidence. The exhibit's lighting and materials created a dark, almost spooky environment where it was very difficult to read text. Characters were rendered in shadowy profiles on particle board, creating an oddly flat effect. Walking through the exhibit space, I found myself mostly wanting to get out as quickly as possible, with nothing specific to catch my eye or hold my attention.  I was left wondering whether there had been a larger vision to the exhibit that went unrealized, or whether the choices that were made simply did not work well.

In the end, I felt that the museum's most traditional exhibits worked best for communicating the history of the city and fostering a connection between the visitor and Detroit's past.  "Form Frontier to Factory" made great use of videos of costumed interpreters, maps, and some built spaces to describe Detroit's transitions during its first 300 years or so. The exhibit ended with a wall of vitrines that included a basic biography of a prominent merchant or inventor paired with a key artifact.  Visitors felt invited to browse among their favorites, almost like seeking out interesting flowers in a garden.  This exhibit also has a great educational counterpart online. The online version combines animated maps of the growing city with timeline events paired with historic images. Lesson plans for each key section in the city's history include lists of primary and secondary sources making it possible for any interested teacher or student to dive head-first down the rabbit hole! 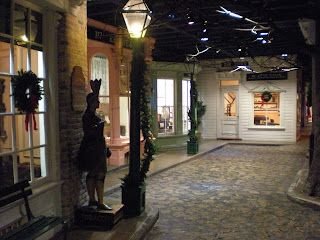 As was recommended by our greeter at the museum, I have saved the "best" for last. The "Streets of Old Detroit" is an exhibit that was lovingly designed and has been lovingly maintained.  Similar to other 3/4 scale models of midwestern city streets (such as the Streets of Old Milwaukee), the Streets of Old Detroit exhibit was built in the mid-20th century, a time when Detroit's prosperity peaked, to celebrate the city's commercial, industrial, and social roots. Every shop, workshop, and office in the exhibit is based on a real place from Detroit's past, populated with a mix of original objects and period antiques and oriented to evoke a sense of purpose-- a reason for existing in a particular historical moment. Unlike the shadowy underground railroad exhibit upstairs, the Streets exhibit is truly immersive, creating a landscape attractive to the imagination. The museum's recent renovations touched this area only lightly, with the addition of portals to explore the specific history of buildings included in the streetscape, and the creation of a "discovery center" in the back for use with school-groups. 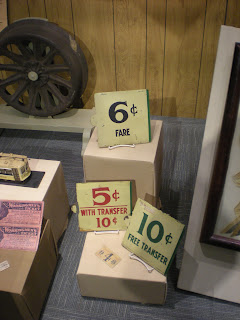 And finally, like a non-sequetur tucked off to the side from the "Streets of Old Detroit" is a whimsical model train exhibit, also lovingly maintained by a legion of docents and volunteers. After a day spent soaking in Detroit's "real" history to the best of her ability, this exhibit enables a visitor to simply kick back and remember why people enjoy history in the first place.  History (or heritage) can provide a purposeful place for play, for imagining how things might have been and adding just enough creative whimsy to enhance a world that is slightly orthogonal to our own.
Labels: museums nostalgia place-based history posts