Something Old in Chicago

Last month, I accompanied my husband to Chicago, where he attended a conference, and I caught up on some much-needed sight-seeing. After a visit to the impressive but confusingly-organized Art Institute of Chicago (highlights included the Marc Chagall America Windows and the Thorne Miniature Rooms), I walked with my friends along the Miracle Mile, taking in some intriguing and peculiar sights.

In the peculiar category, the Tribune Tower ranks at the top of my list. Completed in 1925, this Neo-Gothic sky-scraper is studded with pieces of famous places brought back to Chicago by Tribune correspondents at the request of the newspaper's owner, Robert "Colonel" McCormick. Perhaps the incorporation of these antiquities (ranging from the Taj Mahal to Notre Dame de Paris) satisfied Colonel McCormick's hunger for international significance, but it is, by far, the most concrete manifestation of a world-ranging ideology I've seen outside the British Museum. 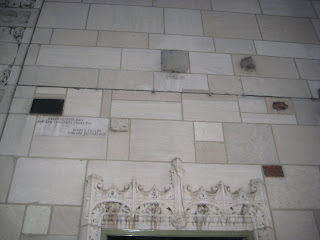 Just as concrete, but in a more traditional fashion, is Chicago's historic water tower. One of the only buildings to survive the Great Chicago Fire of 1871, the water tower looks just like a giant, perfect sand castle. (According to the Tower's brochure, the tower's castle-like walls 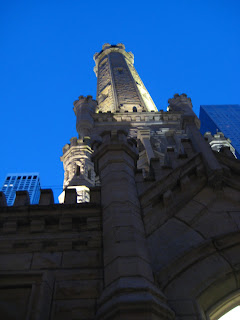 inspired the name and design of the earliest White Castle hamburger restaurants in the 1920s). The building now houses the City Gallery
which specializes in Chicago-themed photography exhibits. In early January, the exhibit featured photos from the city's archives offering stark "then and now" comparisons for landmarks around the city, ranging from famous places to the now-relatively-obscure sights of important events from the past, such as the infamous Haymarket Affair. Although the event is commemorated with a monument in Forest Home Cemetary, and the site of the confrontation between police and protestors is marked with a steel sculpture, the area is not widely traversed by tourists and might otherwise be missed. The City Gallery is free and inviting, and in my opinion, beats window shopping at all but the most impressive departments stores on the Magnificent Mile.
Labels: antiquities edificies galleries posts public space