At Home with History in Traverse City 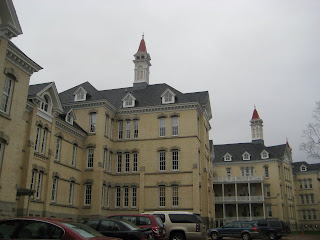 Three years ago, before I moved to central Michigan, a friend told me about an astonishing adaptive reuse project a few hours north of his hometown. He described this project as "creepy" and even "crazy." Given that the project was to convert a shuttered state mental institution into a mixed-use commercial/residential complex, I didn't doubt his assessment.

However, a few weeks ago, I had an opportunity to visit this place with my husband as part of our annual anniversary get-away. The complex is now called "The Village at Grand Traverse Commons" and, although it retains an austere grandeur reflected off of its blonde brick facade, it doesn't feel the least bit haunted.

On the contrary, it feels integrated, accepted or even loved. I suppose this is what every architect of an adaptive reuse project desires-- community support and ultimately patronage. But I believe it takes a special kind of alchemy. The community needs to exist in and of itself before it can rally around an architectural icon. The community needs to want this for itself, not purely to show off to tourists.

When my husband and I arrived at Trattoria Stella, an Italian-style locovore haven in the basement of one of the original buildings in the complex, we did not feel like we were surrounded by tourists. Instead, we felt like we were welcomed into to view a local gem, embraced by a thriving community. In the end, I believe that's the best possible outcome for "heritage tourism" anywhere. 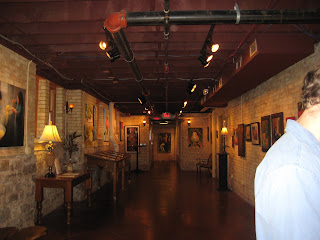