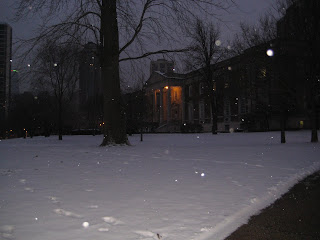 I had the privilege of spending this frozen New Years Eve in Chicago with friends, and being good museum-goers, we started our weekend with a visit to the Chicago History Museum. Since Catherine Lewis's The Changing Face of Public History has become a mainstay of graduate Public History programs, I felt that I already had an introduction to the museum's current iteration. I entered expecting a museum intensely conscious of its audiences and desirous of creating a broad-minded yet still mostly laudatory portrait of its namesake city.

My expectations, along with all of their inherent pit-falls were duly met. The museum's showcase historical exhibition Chicago: Crossroads of America pairs civics-textbook-like section headings with details that are fraught with controversy. My husband, a thoroughly educated layman, found the exhibition lacking in narrative drive. Exciting episodes like the 1968 riots were glossed over in favor of including a few Native American artifacts at the beginning and smidgeons from every form of labor (including commodities traders!) imaginable.

The highlight of the exhibit is its central feature, a trolley car first produced for the World's Columbian Exposition of 1893 accompanied by mannekins programmed to quote from contemporary letters representing a meeting of an out-of-town youth visitor, an African American woman activist and an immigrant laborer who helped to build the pavilions for the fair. I would have loved more like that!

This museum is most certainly worth a second visit and I look forward to returning to spend more time in the temporary exhibitions, often allowed to more fully embrace a single curatorial vision. 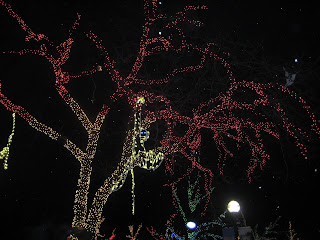 After visiting the museum, my intrepid party braved the cold and headed over to Lincoln Park Zoo to view the ZooLights illumination conspicuously sponsored by ComEd and Charter One. This family-friendly venture was fun and corny and pretty impressive, but I couldn't help feeling badly for the animals with all the unnatural illumination and blaring Christmas music. I might have to ruminate on this further at a later date.
Labels: museums parks posts