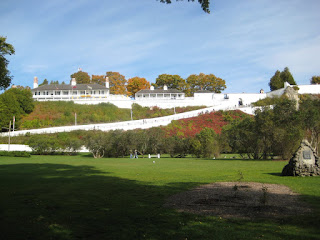 It's the dawning of my second full day on Mackinac Island in Lake Huron where Michigan's mitten meets the upper peninsula, connected by the thin, but elegant filament of the Mackinac Bridge. Mackinac Island is Michigan's most popular tourist destination; it's been in the trade since the mid-19th century and has managed to maintain its niche through a unique mix of historical interpretation, natural beauty and family-oriented resort attractions.

Mackinac Island is small, only 9 miles in circumference, and expresses a unified self-awareness spanning over a century. In the 1890s, shortly after the construction of the Grand Hotel, the islanders glimpsed the likely trajectory of their home and source of livelihood when the wealthy summer folks from the burgeoning cities of Detroit and Chicago brought their newest playthings to the island: automobiles. Through a heated municipal debate which I am sure involved more controversy than made it into the island's genesis stories, the city on Mackinac voted to ban "horseless carriages" of all kinds. Shortly afterward, the state park that made up the majority of the island followed suit.

Today, Mackinac is fully electrified and its roads are paved, but it retains an 1890s look and feel. It is peaceful with streets where bicycles are the fastest means of transportation. Far from feeling like a quaint anachronism, Mackinac holds an interesting environmental potential: with enough bicycle parking, it is not at all ridiculous to believe that this balance could be achieved in other places.

Aside from the experience of the island itself, Fort Mackinac offers historical interpretation of both the fort itself, dating from the late 18th century and rising on a hill above the town, and of the arc of history for the entire island. To me, it seems clear that more curatorial and museological effort has been invested in the interpretive exhibits in the buildings and grounds of the fort than in the "museum" of Mackinac's history. The fort offers a self-guided experience painting a picture of a choice military post during most of the 19th century. This was a place where officers could bring their wives and families and enjoy social gatherings where "ducks and geese, oysters and fresh fruits and vegetables were served," prepared by cheerful Irish and African-American kitchen servants. This was a "healthy" post where the military doctor treated common diseases like consumption and was free to employ some of the new scientific techniques trickling across the pond from Europe. The medical exhibit is innovative, using projection technology to compare accounts from the post's doctor (played by a costumed actor) and a modern medical professional for comparison.

The "historical" overview in the fort's museum space left something to be desired. Sponsored by Ford (and lacking a publication date-- how I wish museum exhibits were forced to state their years of development and completion-- but my guess would be the 60s or 70s), this exhibit felt like a textbook rendered on the walls with occasional artifacts (and some reproductions) supplied for illustration. In typical grand-America-narrative style, it glossed over conflicts with Native Americans and obscured the circumstances of the various struggles with the British. At the same time, it was the kind of exhibit that is immensely fun to read between the lines. Sometimes, the very hokey, silly stuff can provide a more interesting challenge to the knowledgeable viewer than the painstakingly balanced, earnestly interactive attempts of contemporary historical interpreters.

All in all, Mackinac does not disappoint.
Labels: Michigan parks public history

Liz said…
I live on Mackinac year-round and I'm always glad to hear about people enjoying their time on the island.
4:29 PM