Ellis Island and the Statue of Liberty 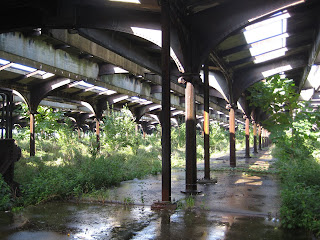 Yesterday we took a visit from an out-of-town friend as an excuse to visit two iconic sites located in as close to our own backyard as you can get in the city. On a hazy September day, we joined a ferry-load of Mid-Western and East-Asian tourists on a circle through New York Harbor to Ellis Island and Liberty Island. We left from Liberty State Park in Jersey City. Since I hadn't been on this particular route since I was in elementary school and summer camp, I couldn't recall from where we departed those 12-18 years ago, but I would recommend Liberty State Park as the port of choice to anyone.

Ellis Island ferries depart from the old CRRNJ railroad terminal building on the southern shore of the Morris Canal. The CRRNJ terminal marked the end of the most intense part of the immigration process for many of the eastern and southern European immigrants who came through Ellis Island's peak during its tenure from 1892-1954. Immigrants granted entry through Ellis Island took ferries to the CRRNJ terminal where they boarded trains to destinations throughout the United States. The CRRNJ terminal closed in 1967 when major rail-lines re-routed after use of the terminal rapidly declined. Today, after at 2-year renovation begun in 2005, the terminal is preserved in a near-perfect state of semi-decline. The rail terminal's interior spaces serve as the ticketing, boarding, concessions and security center for the Ellis Island Ferry while its outdoor spaces and platforms stand laced with enough greenery to give the platforms a ghostly look and spark the imagination. Ellis Island is an excellent museum, but the CRRNJ would have to be the capstone of my experience. (The photograph was taken by me of the CRRNJ platforms.)

Ellis Island has benefited from exhibit renovations and excellent scholarly work since I last visited it in the 90s. Highlights included the shipping records on lecterns in the mostly empty Great Hall (see photograph), the historic exhibits in the main building's west wing balancing artifacts, photographs, text and oral history excerpts, and the exhibit of photographs of the abandoned buildings of the complex taken between 1954 and the 1984 restoration. 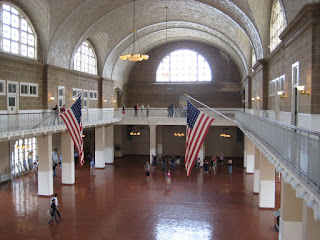 Ellis Island offers an excellent all-around historical experience. We began our visit with an introductory play that was, despite the cliche, both entertaining and informative. We were then free to browse the exhibits, interact with kiosks containing links to census maps and immigrant databases, spend reflective time in un-crowded architectural spaces and listen to oral history excerpts. Exhibits were appropriately stand-alone but linked well together to form a coherent visitor experience. Ellis Island struck the right balance between interpretation and freedom for imagination.

We ended our visit by riding the ferry to Liberty Island and then back to Liberty State Park. These days with tightened security procedures, the Statue of Liberty offers a much truncated visitor experience. More could be learned by viewing the statue from the deck of the ferry and imagining what it would have felt like to see it after at 6-week trip from Poland in steerage. Watching the other visitors experience the "historic triangle," I felt a renewal of my faith in the power of public history.
Labels: education immigration interpretation museums oral history public history